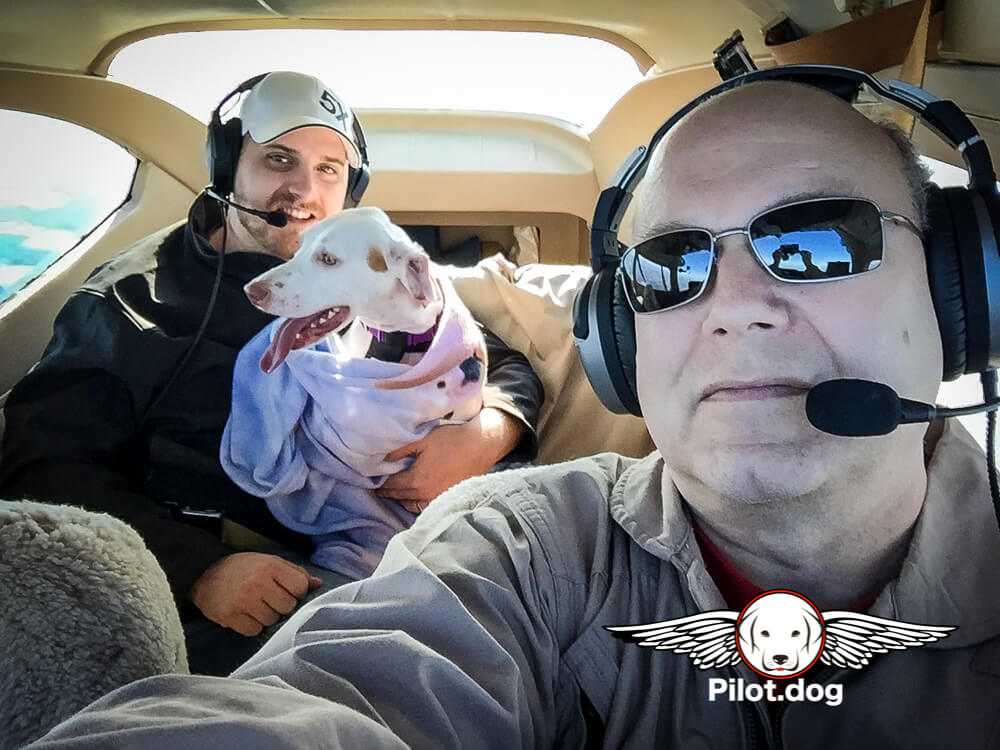 Lucy Loo was a bit of a miracle dog since for a while there it didn’t look like she would ever find her forever home.

On this flight Phillip, our inflight volunteer, and I had the good fortune to meet and play a role in helping Lucy on her way to her new life.

English Pointers are said to be even-tempered friendly dogs who are affectionate, loving, and loyal.

We met Lucy in Erwin, NC. Stuart flew her in from Florence, South Carolina. Lucy was a love from the moment Phillip and I met her. Unfortunately Pam couldn’t make this trip.

As Stuart arrived I noticed an ominous leak under the front of the plane. On inspection it turned out to not be oil or from our plane. Whew

After a quick transfer and a walk by Phillip, we were all loaded up and ready for the two hour flight to Georgetown, Delaware.

Lucy was initially brought to Rusty’s Legacy Dog Rescue in Marion, North Carolina in December 2014 after she was found in someone’s yard. Wanting to do the right thing, Jeri the rescue’s director, returned her to her respective owner only to see her show up again a short time later at the kill shelter.

This is when Rusty’s Legacy pulled her into their program. The rescue only had outdoor space available which Lucy wasn’t fond of so her. Her favorite pastime was to try and escape which earned her a reputation as an escape artist.

Fast forward to three months ago… Lucy was still not adopted locally so Jeri submitted her for rescue consideration to one of the breed specific rescues which voted her a “mixed breed” and rejected her application. But Lucy’s luck was about to change.

One of the volunteers holding her application forwarded the information to American Pointer Rescue and thanks to Anne Palyok who so generously agreed to take Lucy into her South Carolina home as a foster, she was immediately accepted into their national adoption program.

Lucy quickly settled into her new life as a beloved indoor pet. Once she was able to live as a family member, she never attempted to escape again. Lucy found her forever home two months later and we had the pleasure to take her to her new mom in Delaware.

Our flight took us over North Carolina, Virginia, the Chesapeake Bay, Maryland, and then to Delaware. It was a pretty rough ride with turbulence all the way. Even I wasn’t feeling all that wonderful on the flight. That’s why you don’t see more inflight photos of Lucy. 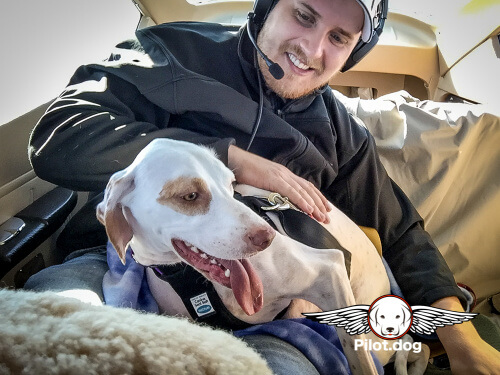 What you are about to watch is actually a bit of a long flying segment but in my all my years flying I’ve never fought such a wicked landing. I thought about alternate airports but the wind had turned nasty all over and looking at the winds I felt confident I could make the landing but it would require a lot of focus.

After touching down we taxied up to introduce Lucy to her new Mom, Kimberly. Kim was waiting for us at the airport and walked out to meet us at the plane.

We gave supporter gift bags to Kim and Stuart from two wonderful companies who donated these items. Smiling Dog Coffee and Plato Dog treats. I have to say everyone involved with dog rescues are such kind and wonderful people to work with.

We watched Kim and Lucy walk away to their new life and after a quick lunch, Phillip and I were off again over the Chesapeake Bay and headed into the sun towards Raleigh, North Carolina to end another successful rescue flight.

To see an update on how Lucy is doing now, click here.