So here is a recent Pilot.dog flying story.

Pam and I were out flying the other night getting my night currency squared away to stay in good graces with night flying and the FAA. To be current you have to takeoff and land at least three times at night within the last 90 days.

It was a beautiful night and we just got the plane back in the air after our backplate assembly problem. Another big hug to Naomi for making a huge donation to help out with that mess.

So I had planned a trip to fly to three airports and then return where we started from. It was a dark, dark night. When we took off out of one airport in my round-robin planed flight of four airports we climbed out in the pitch black and the Cessna 182 started pulling heavily to the right. Even with rudder trim all the way to the right, things were not working out correctly. Something was really wrong. It took even more right rudder pedal to try and keep the plane headed in the correct direction, even with the autopilot on. If I took my foot off the rudder pedal, the plane would swing to one side.

So after spending a few minutes trying to understand what was going on I decided the problem was now a distraction at night and at my low assigned altitude of 2,500 with the antennas around. So I fessed up and declared an emergency for direct routing back into Raleigh.

A few minutes later the problem went away, I cancelled the emergency with Air Traffic Control (ATC), and continued a normal approach into Raleigh. We had a super smooth landing and taxied back to the hangar. Obviously Pam and I were a bit rattled by what just happened. The cockpit was quiet except for the thud we felt as we taxied in over a normally benign little bump.

Pam was a trooper during the emergency. I found out latter the first thing she did was text our 29-year-old daughter, “I love you.” But to her credit she remembered my motto, “There’s no sense dying all tensed up.”

Pushing the plane back into the hangar was the easiest thing I was going to accomplish in the last hour of my just experienced flying life. Or so I thought.

As we pushed the plane in there was a terrible crunching noise. Yep, that’s right, I managed to rip the tail beacon clean off. The beacon swung like a pendulum on the side of the vertical fin, just to taunt me. 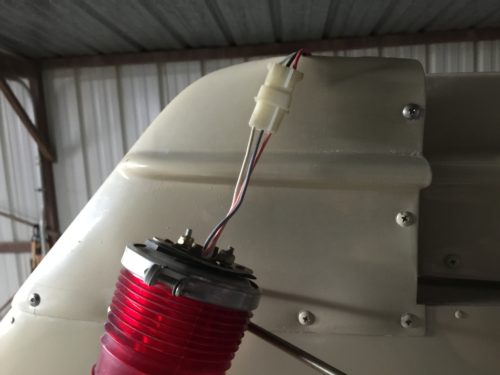 By now I was just rattled, worn out, and kind of upset at ripping the tail beacon off. It wasn’t till the next day when I went to my former happy place, the hangar, when I figured it all out. By the way, the hangar and I are friends again. 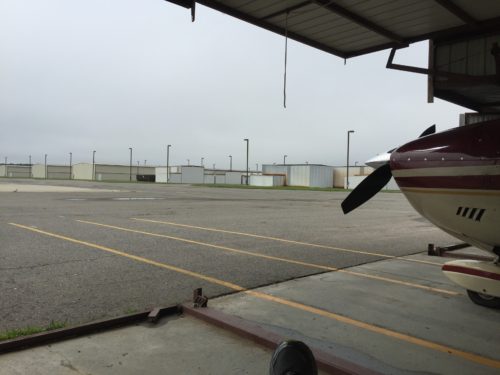 Sitting in a lawn chair in the shade of the hangar I looked over at Dude, our plane, and noticed the back half of the nose wheel fairing was streaked with something brownish. I looked under the plane and the bottom was covered with the same reddish-brown stuff. 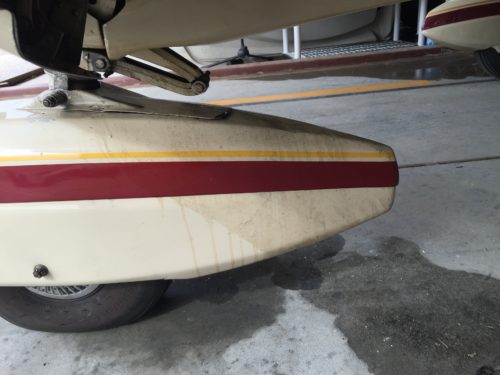 It turns out that on departing airport two and saying, “that’s a bumpy runway,” what had probably happened before landing there, was the nose gear strut had let go and spewed hydraulic fluid all over the bottom of the plane. The landing was super smooth so it is unlikely that was the cause. As we lifted off the nose gear was stuck in steering mode and acted like a rudder. I can attest to that.

And since the strut was flat when we pushed the plane in, the tail stuck up about four extra inches because the nose was four inches lower from the blown strut. That’s why the tail beacon struck the top of the hangar.

Oh the joy of flying.

Repairs are expected to be completed in the next couple of days.

When our mechanic, Don, took the nose oleo strut apart, he found the big O ring in the center had a giant slit in it. It just quit. 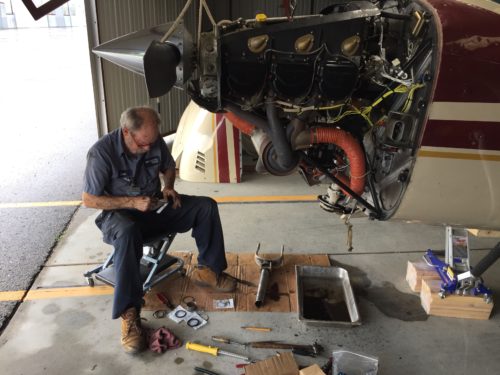 There is no sense wasting a perfectly good mistake, I always say. So the situation was a good opportunity to think about what had happened and see what I could learn from the experience.

If I had known what the symptoms are of a collapsed nose gear strut it would have all made sense to me. Now I know.

But I’m very comfortable with all my other decisions I made during the emergency. I worked the problem till it became a distraction and then fessed up to ATC and told them I had a problem. I maintained control of the plane at all times and communicated with controllers about our status.

The controllers at Raleigh-Durham International airport were fantastic. When I declared the emergency they were prepared to reroute big jets to give me my closest runway. Thankfully that wasn’t necessary.

In the end, everything worked out fine. Most of all, neither Pam nor I panicked and instead we just did what we could do to work the problem and land safely.

While the tail beacon was certainly disappointed at the outcome, this story actually has a mostly happy ending.