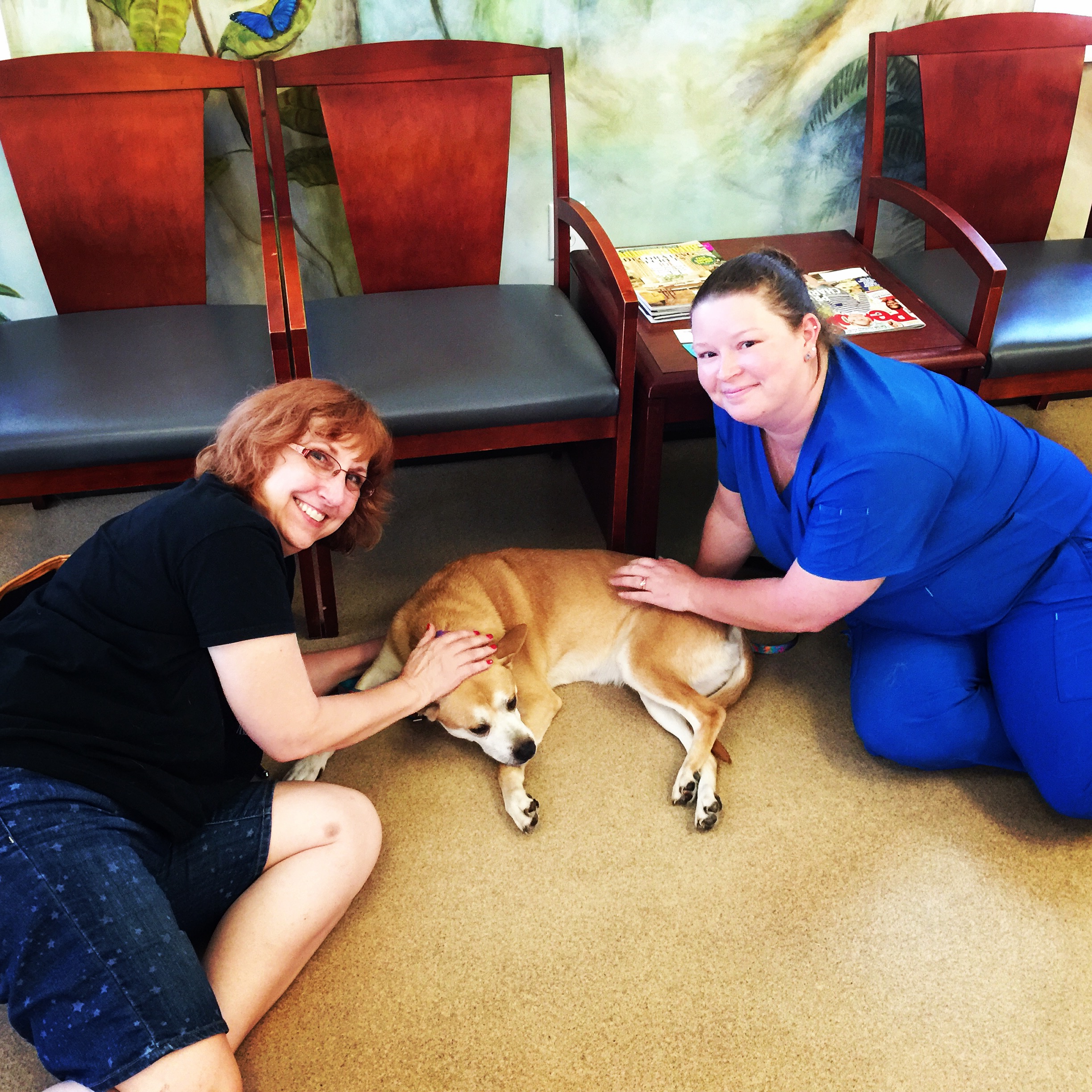 I was sitting in Ollie’s in Wake Forest, North Carolina recently when a dog came to the door and looked in the window.  I noticed it was alone.  So I bolted out the door looking to see where the dog went.

Another woman was running up White Street yelling, “she turned the corner!”  I asked if it was her dog and she said no but that it just was almost hit by a car. She was just trying to catch it to see if it had a tag on its collar.

A police car drove by and turned the corner as the other woman and I ran up the street! (Yes, I was running, and those of you who know me know that, that is something I avoid at all costs!!).

The dog had stopped and was looking at the officer. I bent down and called the her to me. Slowly she came up to me, sniffed and let me take her by the collar. There was no tag on her collar. The officer was talking on the phone. I had a feeling who he was talking to so I asked and sure enough he had called Animal Control. I told him, oh no, they’re not taking her to the shelter. He said he couldn’t take her and the other woman couldn’t take her either so he asked if I was going to and I said of course I will! You could tell by looking at her, she was well cared for and loved. She had a collar but no tag.

My van was at the auto repair shop down the street getting an oil change so I asked if he would please wait for me to go get it.  The officer and the woman said they would both stay until I got back. I ran back to Ollie’s to get my purse and belongings because I left everything there when I ran out the door. The kind people at Ollie’s gave me a cup of water for the dog. I gave the dog the water and again, I ran to get my van. (Totally getting my exercise in!). I arrived at the auto repair shop and told them I needed my van in a hurry because I had a dog that needed rescuing.

I drove back to the dog, women, and police officer and the dog was laying down panting because it was so hot out that day. The officer loaded her up and she settled on the floor behind my seat, just as good as gold and we left.

I called my vets, Wake Forest Animal Hospital, to tell them I was on my way with a stray dog that was running through, downtown Wake Forest with a collar and no tags. I wanted them to see if she had a chip and have her feet looked at.

We noticed when we were loading her into the van that her feet were bleeding. The pavement was so hot and she had been running around on the hot surface for so that that they skin on three of her paw pads had ripped back. They said come on in, there were no doctors at the office but the techs were there.

I pulled up to the office and the she wouldn’t get out of the car. I sat with her for a few minutes telling her it would be alright but she wasn’t budging. So I picked her up to carry her in. It was like a cartoon trying to get her out. She keep putting her legs out so that I couldn’t easily get her out. It was like a scene from Scooby Doo!

We went in and she sat right on my feet. Glenda, one of the tech’s came out with a scanner and scanned her for a chip. It’s funny but I always thought the chips were up in the neck area. I found out that is where they usually start but can move. The chip happened to be down in the middle of her back a little to the side. That’s why it’s important to take your time in scanning an animal. Many times at shelters they only scan one area quickly and no chip is found, even though the dog may be in fact chipped. Plus you need to scan more than once to make sure you keep coming up with the same chip number. We were very lucky she had a chip!

Glenda contacted the chip company and found that her name was Luna and she had been reported missing that morning. They gave her the name and number of Luna’s owner and Glenda called them. While she was tracking down the owners, Jackie another tech came and took a look at Luna’s paws.  They’re were not as bad as they looked.  However, she was in considerable discomfort but should be fine with plenty of rest. She just needed to stay off them and rest.  (There were no vets in at the time, but Dr. Bennett looked at her later with the same conclusion.)

We found out her name was Luna and her owners were on vacation in Georgia. The petsitter left the gate open and she got out that morning.  The sitter didn’t even go look for her.  The owners were contacted by the sitter before he left so she put a notice on Wake Forest Community Page in Facebook.

The owners were devastated and felt helpless so far away from home. The neighbors all got together and had been looking for Luna all morning.  One of the neighbors would be by to pick Luna up, all they had to do was show photo ID that they were who the owners said they would be and the vets would give them Luna.

Luna was such a love that I called, Steve and told him to get to the vets office because if she didn’t have a chip, we had a new dog.  She became really attached to me and me to her. If I got up and left the room, she followed me, even though it was hard for her to walk!  When I came back she would lay literally on my feet, as to say you’re not leaving me!  They were going to keep Luna until a friend could come in a get Luna.  The petsitter had been promptly fired. I gave them my Pilot.dog business card to Glenda and told her to give it to the friend to give to the owners so that they could call me and let me know how Luna was doing after they got back.

The friend came later in the day and picked up Luna from Wake Forest Animal Hospital and took care of her at her home.  She texted me to let me know how Luna was doing. Her vet told her to put Cattle balm on her feet and let her rest. The friend has 6 dogs of her own and her kids are taking extra special care of Luna.  She and I are going to get together and have coffee one day.

Luna’s owner called me that night so grateful Luna was safe.  She was so appreciative and didn’t know how they were going to tell their children that their beloved dog was gone!  They were so far away and had trusted this person to watch their dogs before. He wasn’t a professional petsitter and had become too busy to properly take care of someone else’s animal properly. She and I spoke for a while and was telling me that Luna was 10 years old and that they rescued her over 5 years ago. We are now friends on Facebook and I hope to able to see Luna again. She is such a special pup!

1 thought on “Pam Helps to Save Luna. Good News Story.”