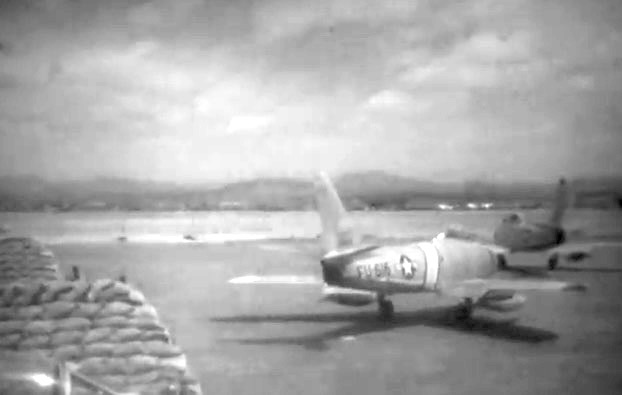 This movie is over an hour long and features many aspects of daily life at the air base. This is not a government propaganda film. It is a new production from newly rescued footage. The film takes a look behind the scenes at building the base, F-86 aircraft, maintenance and operations, mess hall fun, recreation, surrounding area tour, combat operations and of course, loads of footage of the F-86 Sabre jet in operation. At the time this movie was shot, Colonel Francis “Gabby” Gabreski was the base commander. Colonel Gabreski was the leading WWII ace from the ETO and went on to become a “jet age” ace a few weeks before these scenes were shot.

Visiting dignitaries in this film include General Stearley, General Everest and some boxes of fish. When you watch the movie, you’ll get the joke.

I think my favorite scene is when the flight surgeon is giving the finger to all the jets coming in. I can only assume it was a greeting of endearment since all the aircraft numbers began with FU.

The movie is filled with many faces around base. If you had a relative or friend that was serving there at the time, I would not be surprised if you found them in this movie.

Feedback I’ve Received About This Movie

“Just to let you know the 51st Fighter Wing – Korea 1952 DVD arrived today and I’ve just finished viewing it. It is great! I am an F-86 Sabre jet ”fan” and it is terrific seeing the various shots of them – especially those showing the ground-crew working on them. It was very interesting, too, seeing the other activities on the base in addition. A real slice of a bygone era & conflict. I am extremely impressed at the speed with which you got my order to me here in England. I often don’t get that good a service from UK based companies! I will certainly pay further visits to your Website. Thank you again.”

Percy Saunders wrote in: “I was a pilot in `B’ Flight, 25th FIS, 51st FIW at the time when this filming occurred and possibly in some of the film clips. In your descriptive on your web page you mention our Flight Surgeon, Doc Brumgardt and the `Finger Wave’ he gave us pilots on takeoff. This stemmed from his specialty as an Ob/Gyn and his unusual assignment to check a bunch of rowdy fighter pilots prostates (inside joke) and not the FU lettering you alluded to on the F-86. Doc also rationed the Old Turkey Burbon. He was an honorary member of `B’ Flight and lived and kept his stores in our hooch.

Review of this Movie

Just in from Rare Aviation, this DVD covers life on 51st Fighter Wing at Suwon in Korea during April and May of 1952.

The DVD is split into fifteen distinct sections, and begins on 16 April 1952 with a short film on dust control, with troops digging and planting trees outside what appears to be the base chapel. Like most excerpts, there is no sound, but unobtrusive background music accompanies each film.

Next up, taken on the same day, we see General Stearley arriving at Suwon in a B-17 to be greeted by Col. Francis Gabreski, the base – and 51st FW – commander. This film is introduced with two scrolling biographies of both Stearley and Gabreski – a nice inclusion and one that can be easily read as the ‘scrolling’ is not too fast. Short clips of the Mess Hall, Weather Station (30th Weather Sqn) and Motor Pool (51st Motor Vehicle Sqn) follow, all acompanied by restrained backing music.

For many, the highlight of this DVD will be the Sabre footage, and there is plenty of it. First you get an ‘On the Ramp’ section from 30 April 1952, and there are an abundance of Sabres on view, and even the following ’51st Air Police Sqn, May 1, 1952′ section has plenty of Sabre action too; I particularly liked the landing views of the aircraft, which are quite unusual to see, and also give a good idea of the terrain surrounding the base.

The eighth part of the DVD is a short portion about medal presentations by Gen. Everest (including a further biography and more Sabre shots), and then onto a further bout of Line Activity, this time from 5 May 1952. Loading of drop tanks and further Sabre maintenance footage makes this one particularly interesting. The next portion is devoted to ‘F-86 Operations’, again from 5 May, and begins with crews suiting up, pre-flighting their aircraft, starting up, launching and recovering from their missions. This portion is concluded with a mission debrief with sound. Unfortunately, there were no MiG kills that day.

A further section of ‘Line Activities’ on 6 May follows, and includes footage of T-33 ‘Rice Paddy Daddy’ along with the usual Sabres. Shots of Suwon town, along with more Sabres then come prior to another ‘Line Activities’ set of footage from 14 May, with sound, as well as some nice airborne film of the base. The penultimate section shows F-86s taking off over typical Korean village scenes, and it’s an interestingly unusual take on the more usual type of view from along the runway; the local inhabitants seem generally oblivious to the war being fought from their doorsteps.

Final scenes are from around the Mess Hall and the DVD is brought to a close by the Tannoy announcement of the day’s kills – 2 for Maj Bill Wescott, and one each for Col Gabreski, 1/Lt James A McCulley, 1/Lt Robert L Sands, William L Craig and 1/Lt Donald J Hemmer – a total of 7 for the Wing. Though not stated, this footage comes from 13 April 1952.

From start to finish this really DVD packs the action in; it’s refreshing to see the ‘behind the scenes’ action included, so the unsung ground personnel also get their five minutes of fame. The film is that much better for it. Whether you were actually there, knew someone who was there, or are just a Sabre nut, this DVD is well worth getting.