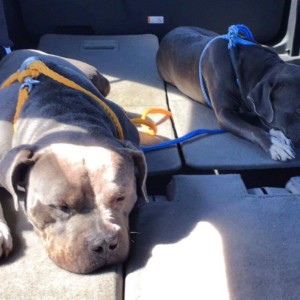 Dogs can be strangers to each other just like people.

Meet Zephyr and Sabre! A few weeks ago, these two had no idea about each other. They were brought to Orange County Animal Control in Orange, California. Zephyr and Sabre were terrified while they were living in the shelter. As each day passed, they were shaking in fear, terrified for their lives.

As their transport was being finalized, Dawn had Zephyr and Sabre put into boarding at El Toro Animal Hospital in Lake Forest, California. They were placed into boarding in the middle of August , and almost two months later, they were finally on their way to their new rescue. A cross country transport calls for a lot of planning and organization, but it is possible!

Believe it or not, one of our own Doobert drivers contacted Rescue Transport USA saying she was planning on driving across the country and would take Zephyr and Sabre with her! With their transport planned, they headed out for a 2,729 mile road trip. Over four days, they traveled across the country getting spoiled rotten along the way. Along the way they stopped at pet friendly hotels where they got luxury beds, treats, toys and lots of love!

The boarding expenses became pretty steep for the receiving rescue while waiting for the transport to be filled.  Anyone who is willing to help the rescue with boarding the paypal address is [email protected].

From not knowing each other before this transport, Zephyr and Sabre have become best buds with a whole team behind them. Thanks to everyone involved in their transport and getting them to their new rescue! Thanks to Rescue Transport USA for coordinating their trip. The post From Strangers to Best Buds! appeared first on Doobert.com.