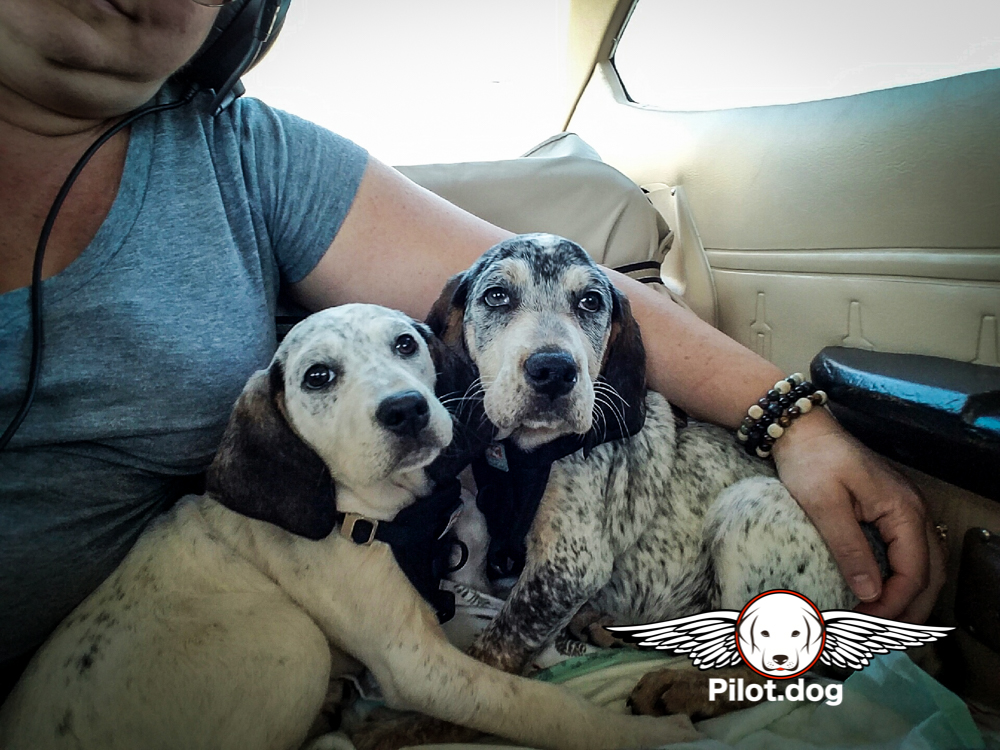 We were looking for a flight to for February 23rd. It was the anniversary of our loosing our beloved dog Dude. Our boy, who we named the plane after and who you hear barking at the beginning of each of our videos, was special. We didn’t want to sit around and be sad all day, we wanted a way to honor Dude in a way that was befitting such a beautiful, funny, loving and friendly family member.

Pam came up with the flight idea from the ritual she and her sister have on the anniversary of their mother’s death. Every year on the 21st of February they go to lunch then shopping just like they did with their mom. So we thought what better way than to fly rescue dogs to their new homes. So Pam set out to find a rescue that would have pups ready to fly that day.

Pam and Ava Werstlein from RescueConnect were in contact and Ava said she could have two puppies that needed to get to New Jersey for that day. And so it began, the flight in memory of Dude and the rescue of Benny and June.

Benny and June are 12 week old Bluetick Coonhounds. They and two of their siblings were rescued by a wonderful volunteer. They were born to some hunting dogs and the volunteer intervened to place them into rescue rather than stay with their hunter owner.

They were living outside in an area where there were Boar Hogs were known to be wasn’t safe. 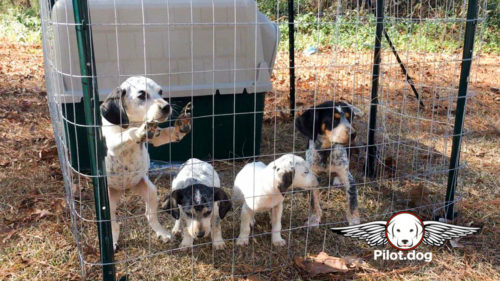 Volunteers are hoping to get the mother spayed, but have not received confirmation yet that the hunter will allow this. Two of the puppies were adopted in NC. Benny and June were placed in a foster home with Candace until they could be adopted. Dennis Bratton from the Salem County Humane Society in NJ (a no kill shelter) offered to take Benny and June and before we could be them up to him they were both adopted. The pups never even entered the shelter. Fosters, Jenn and Anthony in NJ were taking them home with them until after their vet appointments and they could then go to their forever homes!

Early Thursday, February 23rd, we met our inflight volunteer, Michelle Bobe, and went to the airport in Raleigh to head off to Salisbury, NC near Charlotte to meet Candace and the pups. It was a nice smooth flight and we could see all over Raleigh, Durham and Chapel Hill.

It was approximately an hour flight to Salisbury and when we landed, Candace was there waiting for us. Michelle and I went out to Candace’s car to meet her, Benny and June. June came out first and she just melted into my arms. 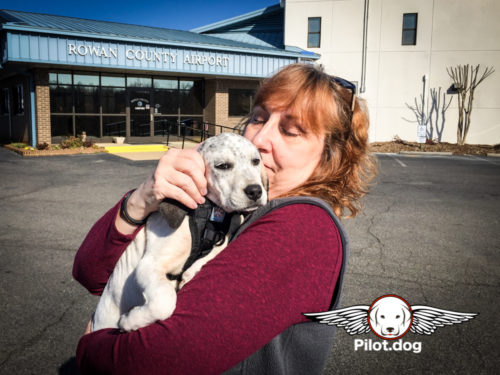 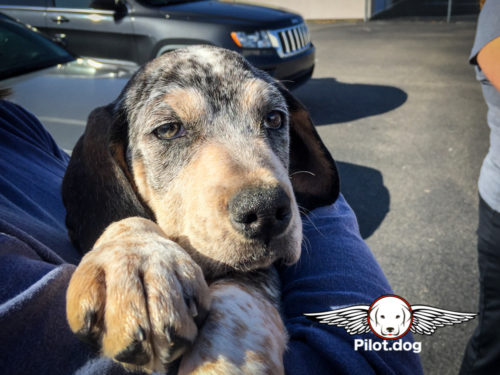 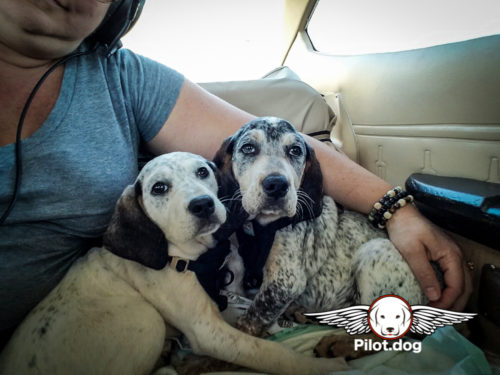 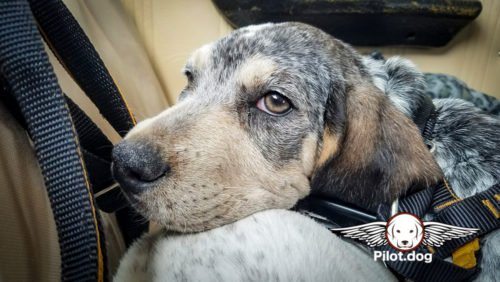 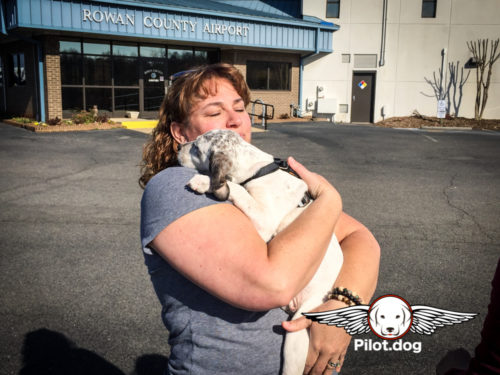 Oh my goodness what a snuggle bug, I could of wanted to take them home with us. They have these big droopy eyes that just scream for a nap! Candace said her goodbye’s to the dogs and off we went to get settled into the plane.

Benny and June were the most chill and laid back pups we’ve ever transported. They just laid there and looked up like, ok lets go. After we tethered both pups to the back seat, Michelle got the awesome job of sitting in back with them and cuddling them. June immediately tried to hide her head behind Michelle’s back. I guess if she couldn’t see us, we couldn’t see her. It was hysterical. 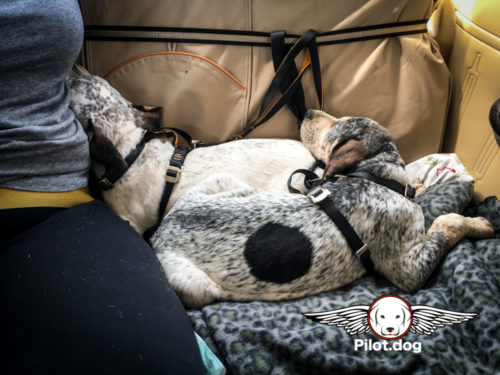 June was also very camera shy. if she poked her head out long enough and you tried to take her picture she would immediately put it back behind Michelle’s back. I think if she could she would have slept the entire way with her entire body behind Michelle.

We took off and headed to New Castle/Wilmington, DE Airport to meet Jenn and Anthony the pups fosters pawrents for a week. It was a great day to fly, the sky was clear and smooth. 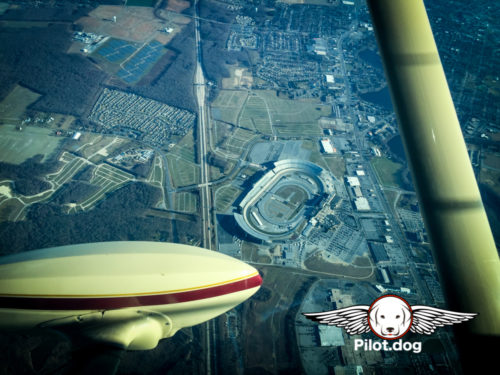 We had a bit of a tail wind so we made it to DE in under 3 hours. Bonus for us. That way we could have more time for lunch. When we landed we met Jenn and Anthony. Benny and June had no problem going with them. They are so chill for puppies it’ was crazy. 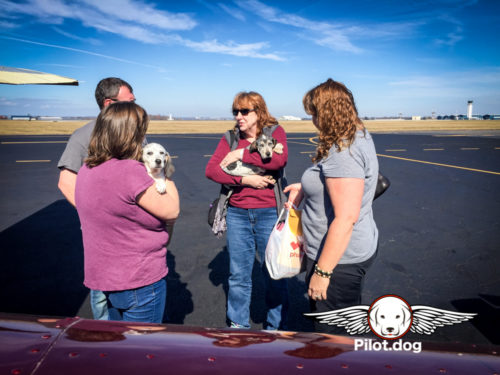 Jenn sat in the back with the pups on their way home so they wouldn’t be scared. Jenn and Anthony took them home to their very own space so that they could rest and recuperate from their long journey. It’s always good to let the dogs decompress after being flown or traveling any lengthy distances. When they are taken away from familiar surrounding and bounced from one place to another they can develop PTSD and have a hard time acclimating themselves to their new homes. By next week Benny and June will be more than ready to go off the their new homes.

The ladies at the FBO recommended a nice place for us to eat in Historic New Castle, Mrs. Snyder’s. What a great place to go and have freshly made food. It was in a quaint little row house off the main drag. I highly recommend their burgers!

Now it was time to fly back to Raleigh/Durham. It was a great flight and we got back just as the sun was going down. What a beautiful sight. 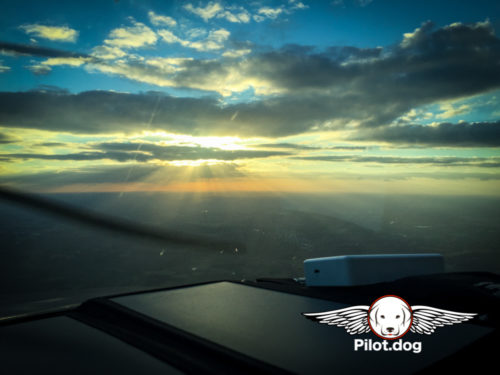 When we landed we were tired but exhilarated at the same time. Michelle was so excited and couldn’t wait to come back again to snuggle with puppies.

I think Dude would have been really happy with our choice of flying that day. He had such a wonderful life and couldn’t have been more loved so with us flying other dogs to new homes and enabling them to have the same type of life that he had he would be proud. I know he’s looking down at us, smiling and wagging his stub of a tail. If he could talk, he would have said, “Good job mom and dad, I love you too. And don’t forget, I’ll be waiting for you at the bridge.”