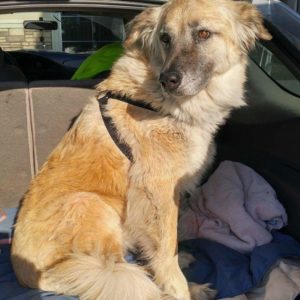 She was found as a stray in Sand Springs, Oklahoma. Brandie looked as if she had been on her own for awhile. A local couple found her on the streets but unfortunately they could not keep her very long. Since Brandie was outside the city limits of Sand Springs, the couple could not take her to the shelter in hopes her owner would come looking for her.

Brandie was posted on several Facebook pages and groups, but there was no luck. The owners could not be found and no one claimed her. This led the couple and her new rescue to believe she was dumped to become a stray, not knowing how long she had been out on her own.

After searching for her owners, Brandie would not be alone anymore!  She was brought into a boarding facility where she was kept safe until Magnificent Mutts was called for her. Sadly, like many other dogs in Oklahoma, Brandie was heartworm positive since she wasn’t given medication to prevent it. In the hands of Magnificent Mutts, she will no longer lack care and love!

They found someone to foster Brandie in Illinois and thanks to RACE4Ran, she was transported over 700 miles from Tulsa, Oklahoma to Hillside, Illinois. Brandie will be loved and living the good life just as she deserves! She is a beautiful and sweet dog that all of the volunteers fell in love with the second the met her.

Brandie is looking for her forever home and she loves people of all ages and will be an amazing and loyal four-pawed addition to someone’s family!

To learn more about RACE4Ran you can go here.